The argument from design (and the reality of biology) 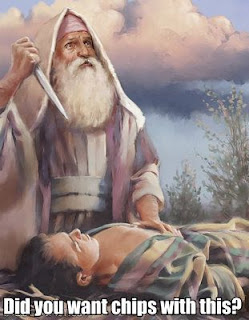 So often when we compare what we feel is true with the testable reality of what is true we are struck with the fact that our own minds often struggle to understand most things.

Take the argument from design, not only formally a popular religious argument for a god concept but, and here's the rub, a naturally intuitively compelling one for any human. It's extraordinary (but easy to understand) that the most popular reason why people believe there is a supernatural realm is due to their own inability to understand the natural one. The basic gist is that when a human looks out upon the world and their extraordinarily improbable existence in it, one is naturally struck with what we describe as awe and wonder but is more accurately bewilderment. When we see something complex it is easy to resort to the simple (and poorly or non explanatory) gut feeling that since humans tend to do things for a purpose or reason, the entire universe must be the way it is because a being, which just so happens to resemble us (or we It) meant for it to be that way. More recently the discovery that were the universe to have been just a tiny weeny bit different (as defined by the cosmological constant) that we would not be here at all. Ah ha! Surely that's more evidence to support the claim.

The argument (it's obviously all for us from 'It'. Woopee!) is captivating until you think about it. One honest glance at the universe and we come to the conclusion that it is overtly hostile to life in general.  Not only is Earth (and its passengers) not at the centre of the universe, it's not even the most important rock in what we now know is a tiny solar system with a middling class G2V star at it's centre somewhere in a remote corner of one of billions of galaxies. And one look at our nature puts ourselves into perspective as well. Life is precious, brief and hostile. Moreover religious traditions fool their flocks (we love to be fooled) into thinking that 'value, meaning and purpose', you know those 'Big' life questions that only faith can examine, isn't derived from life at all but from fantasizing about a life eternal and therefore actively diminishing the value, meaning and purpose of the only life we all managed to have. You need to be prepared to devalue life in order to be convinced that you can escape its end.

Further still, if we're brave enough to keep pondering, an epicurean glance at any supernatural claim reveals them all for the absurdities and immoralities they are. Now look around honestly at the world which only a moment before seemed like a celestial bespoke just for us (the ones who believe I mean, since the greatest sin is simply being unconvinced (of a hundred or more entirely different traditional claims!)). If a god concept explained anything it could only describe 4 possible realities given that life, as much as we'd wish it was all wine and roses, is quite difficult at times and uniformly fatal. Therefore either the God of your choosing (that's where they come from) is indifferent and doesn't care to prevent harm, incompetent (a better God) and wants to prevent harm but cannot, malevolent and quite enjoys the suffering or the most plausible, not real.

The unreality of god concepts forces upon humans the very thing that nature built us to avoid - our own responsibilities both for our knowledge and morals. My religious acquaintances love to assert that only good has come from such beliefs but I'm yet to see how pretending to know rates as any type of wisdom or morality. The most accurate definition of faith I've ever heard was simply 'pretentiousness'. Want knowledge? Pretend you have it. Morals? Ditto. The clearest example of how these beliefs so effectively strip away the need to think is borne out by the absurdity of the story of Abraham and Isaac brilliantly explained here.

In 1994 a woman, Sarah Smith, captured the hearts (and values, meaning and purpose) of a nation when she reported that a black man had hijacked her car with her 2 young children still aboard. Tragically it was later discovered that Mrs Smith had drowned her children as a demonstration of love for another man who told her he did not want to be part of a 'ready made family'. The nations disgust was levelled at both people, a mother who would even contemplate slaughtering her own children to say nothing of actually committing filicide as an act of love and a man whose idea of love was to suggest it.

And yet our own natural sense of morality is inverted as soon as a god concept is inserted into the equation. It's difficult for people such as myself who do not believe god concepts describe any part of reality except the imagination (and self deception) to comprehend the level of self imposed delusion required in the futile attempt to shove this ugly distortion into a moral round hole. What is beyond repugnant is made, wait for it, a great expression of love if the being who requires the slaughter also has the ability to torture you for eternity. I've had people sincerely (and condescendingly) 'explain' to me that since I don't believe what they do I can't be right (until I do). God, apparently didn't really want Abraham to put a knife through his son, oh no. Seemingly, so goes the 'explanation', Abraham was in the habit of not listening to God (a good thing one would think) which prompted the Creator to 'test' Abraham by telling him to do it. Lol. It was just a joke. I think it was Hitchen's who pointed out that only religion seems to be able to take the wise and moral person and undo them.

A point of clarification - religions are not the only problem, people are. Gods do not come from themselves, they are invented by the imagination hence why there are always so many popping into and out of popularity. So many messiahs, prophets and miracles. A dime a dozen. But more accurately we should turn to Orwell who explained that any totalitarianism is basically a theocracy since all share the same 3 characteristics - irrefutable doctrine, infallible hierarchy and the right to invent history. Since no individual can achieve all this, one type of entity can - a horrible delusion.

The tragedy that people easily relinquish their independence of mind not so much for promises of freedom but threats of annihilation is the only motivation I have for talking about the most uncomfortable topic we have.  What's the harm I hear people say? There is no harm if you don't even start to think it through. Humans are born selfish to begin with, an evolutionary necessity, a Mark not of Cain but natural selection. But we clearly have the ability to recognize what is not moral while being easily fooled into believing the opposite. It is what psychologists call cognitive dissonance, the ability to hold two entirely contradictory beliefs and deal with it through further cognitive back flips. If it feels true it will feel exactly as if it is true. However we rationally understand that if something feels true it is, in and of itself, an unreliable way to determine truth. Test yourself and you'll note that you never conduct your day by having a feeling and leaving it unmolested by your own ability to use external objective methods to check it! Crossing a road? Check you hunch. Teaching a child, your child how to do anything? Check your hunches. Flying, building, food selection, anything at all and we understand that proceeding based purely on feelings of truth which cannot be otherwise validated is utter stupidity or plain selfishness. Not so religion which inverts, prevents and warns against doubt using the most effective device of all - fear. Children are still offered the bait and switch, the perpetual love and protection of the father (which all children crave), sealed with the threat that if you happen to find yourself unconvinced by what are naturally ridiculous and immoral (or at best naive and childish) stories you face worse than death, you face both the real and fantasy version of what humans fear the most - being ostracized from community. I think it was Hitchen's again who remarked that these ideas infantilise people. They never edify them.

Fortunately there seems to be a growing population of Ex's. Ex-Muslims, Ex-Pastors, etc. And there is growing evidence that most who find themselves unconvinced by unconvincing narratives do not advertise it (since it would lead to various degrees of shunning). Religions are here to stay, being as they are natural products of the human mind. I do find it fascinating, and obvious (once it becomes so) that the most despised Theory of all is natural selection (typically confused with the fact of evolution) and yet it is that process which, by necessity, 'has to' produce a type of cognition better suited to quick reactions and high emotion than considered thought. We have to be aware of our own mortality (to want to avoid it) as well as being capable of imagining any way out of it no matter how absurd. It is even a mark of doctrinal authenticity and the devotees badge of courage to accept and swallow whole the most preposterous, risible, farcical and ultimately selfish and immoral ideas. If ones wants to understand the 'magic' of delusion it is just that - the ability to take the sane and make them embrace and adore the insane. Humans need only one thing to enact it - our heavy emotional need for self preservation above all else, even our own children. What honest parent has never felt what my mother once described and later I experienced - to love unconditionally and want to kill the little bastard all at once.

In a shrinking world it is even more imperative that we protect and encourage environments conducive to what should be the ordinary and quite civil exchange of ideas. To argue that the story of Mrs Smith can be made moral merely by pretending that imaginary things make it so is the antithesis of anything good or wise. That the majority are foolish enough to believe that religious traditions do anything but detract from civil discourse surely has to be their greatest achievement of all.